Select a location to call.

Crohn's disease, named after Dr. Burrill B. Crohn, who was a member of the team that first described the disease in 1932, belongs to a group of conditions known as inflammatory bowel diseases (IBD). Crohn’s disease is a chronic inflammatory condition of the gastrointestinal (GI) tract. It causes inflammation, ulcers, and bleeding in the digestive tract. Crohn’s usually affects the end portion of the small intestine called the ileum, but any part of the digestive tract can be affected, from the mouth to the anus. 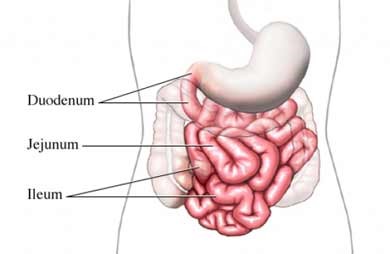 According to the Crohn’s and Colitis Foundation1, Crohn’s disease may affect as many as 780,000 Americans. The cause of Crohn's disease is not known, but inflammatory bowel diseases, such as ulcerative colitis and Crohn's disease, seem to run in families. Some researchers think that it is due to a reaction to a virus or bacteria that causes the immune system to overreact and damage the intestines.

A risk factor is something that increases your chance of developing a disease or condition. Risk factors for Crohn’s disease affect men and women equally, and include:

Symptoms of Crohn’s disease often flare up and then go into remission2. Symptoms may include:

Complications of untreated Crohn's disease may lead to:

You will be asked about your symptoms and medical history and a physical exam will be done. If you are diagnosed with Crohn's disease, testing can be used to monitor the disease and assess complications.
Tests may include:

Imaging tests evaluate the intestines and surrounding structures, and may include:

A biopsy may be taken during some of these tests. A biopsy is a sample of the intestinal tissue that can be examined under a microscope.

What are the treatment options for Crohn’s disease?

There is no cure for Crohn’s disease, but several treatment options that can help ease the symptoms and stave off flare ups. After a diagnosis, recommended treatment may include:

Your doctor may advise that you avoid foods that trigger symptoms. These foods are different for each person. They may include:

There are many types of medications that are used to treat Crohn's disease, including:

Very severe Crohn's may not improve with medications, and the diseased section of the intestine may need to be removed. The two remaining healthier ends of the intestine are then joined together. You are still at high risk for the disease returning.

Surgery also may be done if you have an obstruction or fistulas.

Exercise may help reduce the risk of developing Crohn's disease. Talk with your doctor about an exercise program that is best for you.

For additional information and to connect with other people who have Crohn’s disease, visit the Crohn’s and Colitis Foundation at http://www.crohnscolitisfoundation.org/ or the National Institutes of Health at www.niddk.nih.gov.

If you are exhibiting symptoms of Crohn’s Disease, please consult your physician. Dr. Shail Sheth, with Regional Health Gastroenterology can help with diagnosis and treatment. To schedule an appointment call the office at (812) 234-5400 or click below to book an appointment online.